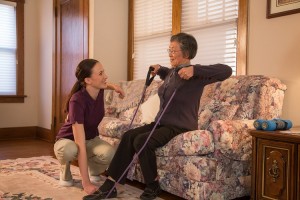 It’s the kind of news that could help Mom or Dad get moving! Seniors – even those diagnosed with mild cognitive impairment (MCI) – could stop cognitive decline with an exercise program of moderate intensity, according to a new study.

It is the first research to discover that exercise and improved fitness can impact cortical thickness in the brains of older adults diagnosed with MCI.

The recent study finds older adults that improved their fitness through a moderate intensity exercise program increased the thickness of their brain’s cortex, the outer layer of the brain that typically atrophies with dementia illnesses such as Alzheimer’s disease, according to research from the University of Maryland School of Public Health. These effects were found in both healthy older adults and those diagnosed with MCI, an early stage of Alzheimer’s disease.

“Exercise may help to reverse neurodegeneration and the trend of brain shrinkage that we see in those with MCI and Alzheimer’s,” says Dr. J. Carson Smith, associate professor of kinesiology and senior author of the study, published in the Journal of the International Neuropsychological Society.

“Many people think it is too late to intervene with exercise once a person shows symptoms of memory loss, but our data suggest that exercise may have a benefit in this early stage of cognitive decline.”

If a senior is healthy enough for activity, encourage him or her to keep moving. Go to GetMomMoving.com for tips on senior activities.

Posted in Alzheimer's and Dementia